Each cinnamon roll is extra soft with the most delicious cinnamon swirl!
This cinnamon scroll recipe is specially made with powdered sugar, melted butter, and cinnamon sugar mix – they are soft and light and topped with a glaze of cream cheese frosting or icing.

My other great go-to homemade roll is a cheese bun – yum.

Not only that we have a full video showing the whole method.

The TRICK To Make An Easy Cinnamon Roll

Top Tip: If it is cool in your kitchen let the dough rise in your oven!

Cover the dough and place it inside.

Leave the oven door open and watch that after 30-60 minutes the dough will have doubled in size.

This mix will make 10 good-sized (not jumbo rolls) cinnamon scrolls – Preparing the dough is about 30 minutes work, but then you have 2 x one hour for proving. (letting the dough rise).

After mixing take the cinnamon dough out and knead it for about 3-5 minutes – see our video on how to make cinnamon buns to see the technique if you are not sure.

Then set aside to rise for one hour – see below the before and after proving (rising).

Next step – is to roll out the cinnamon roll dough and put in the raw sugar and cinnamon filling with the butter. Use the best quality cinnamon you can – we used dutch cinnamon – which probably comes from Indonesia.

The next step is to put the rolls in a baking dish – and let them rise again for about 1 hour.

Now bake Cinnamon Scrolls for approximately 25 minutes at 400 F or 200C. Check them after 15 and 20 minutes. Take out when they are just brown on the top like the photo below.

Now make and put on the frosting.

Now You Are Ready To Enjoy. 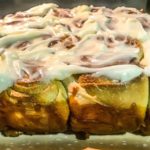 The baked rolls are so nice and they do not need baking soda, heavy cream or baking powder

How Do You Make Gooey Cinnamon Rolls?

The rolls touch together while baking – and this keeps the middle nice and soft and gooey!

Plus because they are together the filling from the center doesn’t leak out.

How Do You Make Can Cinnamon Rolls Better?

Do not mix the salt with the yeast – salt tends to kill or inhibit the yeast.

What Type Of Flour Is Best For Cinnamon Rolls

Why Is My Cinnamon Roll Hard

You have baked it too long and it has dried out

Why Are Cinnamon Rolls So Good?

Imagine – butter, bread, cinnamon, and warm milk or a coffee topped with heavy cream – the taste is amazing – there is nothing like a cinnamon bun! – but then add the aroma of smell on this cinnamon rolls recipe and now you know why the baked rolls are so good.

Are Cinnamon Rolls Dessert Or Breakfast?

How Do You Make Cinnamon Rolls Taste Better?

Use the best quality cinnamon you can – dutch or indonesian.

How Do You Make Cinnamon Rolls Without Burning The Bottom?

Do not have the oven temperature too high – cook them on parchment paper in the middle of the oven.

How Do You Moisten Dry Cinnamon Rolls?

An old baker’s trixk for the perfect cinnamon roll is to add a little yogurt to the bread mix – about 1 tablespoon.

Can You Eat Cinnamon Rolls For Breakfast?

What Type Of Flour Is Best For Cinnamon Rolls?

All-Purpose white flour is the best

Is Bread Flour Or All-purpose Flour Better For Cinnamon Rolls?

All-purpose flour is better as it is not quite as strong as bread flour.

What Happens If You Overproof Cinnamon Rolls?

With baked cinnamon rolls proofing too long can have them collapse – stop the proofing when the size has doubled after about 1 hour.

Can u freeze cinnamon rolls?

How Do You Know When Cinnamon Rolls Are Done?

The baked cinnamon rolls are done when they are just lightly brown on the top do not overcook.

How Long to Cook Country-Style Ribs in Oven at 350

How Long Do Cinnamon Rolls Last