How Many Hash Browns Per Person

How Many Hash Browns Per Person For A Big Group.

We also have a handy table for the exact amounts of hashbrowns you need to buy for a group of 10 to 100 people.

Hashbrowns are delicious breakfast food that are made out of potatoes. They are usually served alongside eggs and bacon.

They are often fried in oil until golden brown. The hashbrowns then go into the oven where they are kept warm for serving.

How Many Hash Browns Per Person?

The Swedish Rösti is a popular dish that was invented in 1598, and many people today believe that it’s the legitimate father of hash browns. With fried potatoes, hash browns became a staple in breakfast and lunch dishes, especially when food establishments like Burger King and McDonald’s added this side dish to their menus.

There are many varieties of hashbrowns. Some people prefer regular hashbrowns while others enjoy sweet potato hashbrowns.

Here are some interesting facts about hashbrowns: • In the United States, hashbrowns are one of the most popular side dishes.

But if you’re preparing hash browns at home, you’re probably confused about the amount that you should serve for your family or guests. So, how many hash browns per person? Find the answer to this question in this article.

How Many Hash Browns per Person?

Deciding on the number of hash browns to serve per person will help you manage your shopping and food preparation time, whether you’re cooking for your family or a large group.

How Much Potato Per Hashbrown For Home Made Hashbrowns

In most cases, one medium or large potato will be enough to prepare enough hash browns for a single person. That’s between 5 and 10 ounces which is equivalent to half a cup of hash browns.

You don’t need to serve more hash browns because this dish is usually served as a side next to eggs, burgers, steak, and even chicken. It’s popular as a breakfast side dish next to eggs and bacon but can also be served all day long.

How Many Hashbrowns Per Person For A Big Group

How Much Is a Serving of Hashbrowns?

How Much Does a Cooked Triangle Hashbrown Weigh? 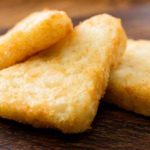 This will allow some people to have seconds

How Many Hashbrowns for 20 People

How Many Hashbrowns for 50 People

How many pound of store-bought hashbrowns to feed 50 people

How Many Hashbrowns Per Person for 100 People

Trader Joe’s carries two types of hash browns, shredded hash browns, and patties. Both recipes are tasty and time-saving, but the patties are easier to cook and serve.

There’s no significant difference when it comes to the taste, but the patties stay intact, so when you flip them to make sure that they’re thoroughly cooked, you’d still have well-cooked hash browns that look and taste good.

The shredded ones are delicious, but they tend to break when you flip them over with the spatula. This is why they can be a little messy.

Both recipes are easy to prepare, and you can elevate them by adding sour cream, cheese, or bits of bacon. You can also serve them as they are with a little bit of salt and pepper.

How long can you keep hash browns before they go bad?

Pre-packaged hash browns can last in the freezer for up to 8 months, as long as you keep them frozen. However, if you decide to take them out of the freezer, they should be cooked within 24 hours.

Once hash browns have turned mushy, they’ll lose that crunchy texture that many people like. They won’t go bad within a day and are still edible, but they should be cooked frozen for a better taste and texture.

After cooking hash browns, they can last in the fridge for about 3 to 4 days. After that, you can reheat them in the microwave by arranging them in a single layer with enough space between the pieces. After 30 to 60 seconds, flip them on the other side and serve as desired.

How Many Pounds of Hashbrown per Person

How Many Pounds Of Hashbrowns Per Person?

A pound of potatoes weighs about 454 grams. A typical serving of hashbrowns contains 1/4 cup of cooked hashbrowns.

So, how many hashbrowns do you eat in a week? How many pounds of hashbrown do you eat each week?

This is equivalent to 3.6 servings of hashbrowns per week.

Can You Serve Hashbrowns at Lunch?

They’re one of those foods that people either love or hate. I’m guessing most of us would rather eat something else than eat them.

But what about serving them for lunch?

I’ve seen many recipes online where people recommend serving hash browns for lunch. Some say it’s a healthier alternative to pancakes or waffles. Others think it tastes better.

As long as the hashbrowns are crispy and golden then they will be a winner.

Can You Prepare Hashbrowns the Night Before

Yes, you can prepare hashbrowns the night before either completely or just in part. I am always looking for ways to save time. I don’t have much time to spend cooking meals especially since my husband works nights. My solution was to cook up a batch of hash brown potatoes the night before. The next morning I just had to heat them up and I had breakfast!

How Do You Keep Homemade Hashbrown Potatoes Together?

I mean, what keeps them from falling apart?

Hashbrowns are one of those foods that everyone loves, but no matter what you do, they always fall apart.

But there’s something about hashbrowns that makes them fall apart.

Here are some things you may not know about hashbrowns:

Hashbrowns are basically just cooked mashed, shredded, or grated potatoes. This means that they’re made from potatoes that were previously boiled, mashed, and then mixed with oil and spices.

So, next time you make hashbrowns, try adding these ingredients to bind your potatoes:

Some Hashbrown Tips when Cooking Then for A Large Group.

If you want to make hashbrowns for a larger crowd, here are some tips to keep in mind:

The first thing you need to consider is the size of your hashbrowns. If you plan to use a deep fryer, it might take longer to cook them.

Choose a Great Fat for Flavoring Your Hash Browns

The best way to flavor your hash browns is by using a high-quality oil like avocado oil. Avocado oil has a mild taste that won’t overpower the potatoes.

How to prep your potatoes for the skillet

The best way to prepare your hash browns is by slicing them into thin strips. This allows them to cook evenly and quickly without drying out.

If you’re planning breakfast for a large group, consider serving a variety of options so everyone has something they like. For example, serve bacon and eggs, sausage patties, pancakes, waffles, French toast sticks, oatmeal, granola, yogurt parfaits, and fruit.

Ingredients For cheesy hashbrowns for a crowd

You can add any cheese you want to your hashbrowns. However, I suggest choosing a mild cheese like cheddar because it doesn’t overwhelm the other flavors.

What Are the Best Ways to Cook Hashbrowns for A Large Group?

There are two main methods to cook hashbrowns for a large group. One method uses a deep fryer and the other uses a skillet and oven.

This method requires you to preheat your deep fryer to 350 degrees Fahrenheit (180 degrees Celsius).

This method requires you to preheat your oven to 400 degrees Fahrenheit (200 degrees Celsius) and bake the hashbrowns for 20 minutes.

How Many Servings Are in A Bag of Frozen Hash Browns

In a 2lb bag of frozen hashbrowns, there are 15 average-sized potato hashbrowns.

How Much are Hashbrowns at McDonalds

Are Hashbrowns High in Calories

A single serving of hash browns contains 240 calories and 23 grams of carbohydrates. That’s about 8% of your daily recommended carb intake.

So what makes hash browns such a calorie bomb? The main culprit is bacon grease. Bacon grease adds flavor to the hash browns, but it’s also packed with saturated fats.

How Many Grams Is an Average Hash Brown

An average hash brown weighs between 1 ounce and 2 ounces.

Best Side Dishes for Ribs