How Much Corn per Person

How Many Pounds Corn Kernels Per Person for A Big Group

How Many Corn Kernels per person for a big group of people in 2023 – How Many Cans Of Corn Should I Buy for My Birthday Party?

Corn is one of the most popular crops grown in the United States. Corn is used in making food such as corn flakes, corn chips, corn tortillas, popcorn, and corn syrup. In addition, corn is an ingredient in beer and whiskey.

How much Corn kernels per person for a Crowd is key to having a successful big event. Knowing how many pounds in a single corn kernel serving will many sure each guest gets enough. And almost everyone loves corn.

How Do You Calculate the Serving Size of Corn per Person?

Corn kernels are one of the most common ingredients used in cooking and it goes with most mains and sides so calculating the right serving size is important, what size serving should I give my family?

How do you calculate the Serving size of Canned Corn per person?

A serving size of corn kernels is 1/2 cup. Corn Kernels is a popular food and is often used as a side dish at a BBQ or Family Event.

It does not matter if the corn comes from a can and is individual kernels or creamed corn you can budget on 1/2 cup per person for a crowd.  This is approximately 4.5 oz or 125g per single serving of corn kernels.

How do you calculate the Serving size of Frozen Corn per person?

For a single person, you should serve 4.5 oz or 1.2 cup of frozen corn kernels.

How Many Pounds of Corn per Person Should I Buy? 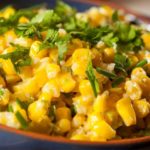 You should buy just over 1/4 pound of corn per person.

How Many Servings of Corn Do 2 lbs Of Corn Feed? 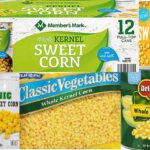 2lbs of Corn will feed 7 people.

How Many Pounds of Corn Do You Need for 8 People? 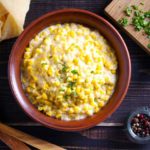 How Many People Will 5 Pounds of Frozen Corn Feed?

How Much Corn per Person for 4 People

For 4 people you will need 1.2 lbs of frozen corn or canned corn kernels

How Much Corn per Person for 10 People

How Much Corn per Person for 20 People

How Much Corn per Person for 50 People

How Much Corn per Person for 100 People

How Much Corn Per Person for Different Events and Occasions

When serving corn kernels buffet style you should budget on 5 oz per person, just a little bit more.

Thanksgiving Dinner Corn Servings – Allowing for seconds I would go with 5oz per person if you only have 2 other sides – else reduce it by 20% if you have a choice of 4 or more side dishes. The same goes for Christmas Dinner 5 oz per person.

For other big crowds like BBQ, New Year, Picnic and Tailgating parties.

Corn kernels are one of the most versatile ingredients out there. They can be used in many different ways, such as in baked goods, salads, soups, and pasta dishes.

They can also be added to sauces, dips, and dressings.

Here we cover what foods pair well with corn kernels.

Vegetables are another common pairing with corn kernels. Corn kernels add a nice crunch to vegetables, and the combination makes for a delicious side dish.

Seafood is yet another food that goes well with corn kernels. This is because corn kernels complement seafood nicely.

Bread is another food that goes well together with corn kernels. Corn adds a nice crunch to bread, and the combination makes a tasty snack.  Toasted Creamed Corn Sandwiches are one of my favorites.

Pasta is another food that pairs well with corn kernels. Corn provides a nice crunch to pasta, and the combination makes an excellent meal.

Salads are another food that go well with corn kernels. The crunchiness of corn kernels complements the softness of lettuce leaves.  Think of a Cobb Salad – where would it be without corn kernels.

Soup is another food that goes very well with corn kernels. It’s no surprise that soup is a favorite among people.  Creamed Corn Soup is delicious on a cold winters day.

How to Use Corn Kernels:

To use corn kernels, simply mix them into any type of food. For example, you could sprinkle some corn kernels onto a salad, toss them into a stir-fry, or add them to a casserole.

The possibilities are endless!

Foods that don’t go well with corn include dairy products, meat, and grains.

What Are Best Sizes of Corn to Buy for A Party

For a crowd get the 5lb bags for frozen corn from Costco or Sams Club.

Maize kernels are the maize’s fruits. Maize is indeed a grain.  They (corn kernels) are most commonly known as a vegetable. However, cornstarch is also well recognized.

The kernels might be black or dark brown, bluish to gray color through to the classic yellow and even purple. In 16 rows, one cob or ear of corn holds around 800 kernels. (wikipedia.org)

Is It Safe to Eat 2 Year Old Frozen Meat