How Much Pumpkin Pie Per Person

Pumpkin pie is a pumpkin-based dessert dish with a spicy custard filling. The pumpkin especially is a symbol of the harvest, but because the pie has become ubiquitous with the holiday and harvest season, it too has become a harvest icon.

It is often cooked for big family reunions at Christmas and especially Thanksgiving when pumpkins are in abundance and in season in the Americas and Canada.

How Much Pumpkin Pie Do You Serve Per Person Thanksgiving

Serve one 4 inch triangle slice of a 9 inch pumpkin pie per person. The circumference of a 9 inch pie is just over 28 inch, so if you measure when you cut one 9 inch pie will serve about 6 people.  So a 28 oz pie will give 4 ounces per person before you add the cream or ice cream.

If you are having a pecan pie for Christmas Crowd see how much per person here.

The contents of the pie is of course pumpkin and vary in color from bright orange through brown.
The pie is often flavored with pumpkin pie spice, a spice blend created with ingredients such as nutmeg, cinnamon, and allspice. The pie is traditionally made using canned pumpkin, and pumpkin puree, although fresh pumpkins (cooked pumpkin) may also be used.

But how much Pumpkin Pie should you serve per person? Serve one 4 inch slice of Pumpkin Pie per person with some topping.  Another way of calculating just how much for each guest is to serve 1/4 pounds per person. The good thing about weight it that if you make a deep dish pumpkin pie, or even a slab pumpkin pie you can still serve just about 1/4 of a pound per person.

It also is commonly served with a turkey roast, see how much turkey per person and our online Turkey Per Guest Calculator.

How Much Pumpkin Pie For a Big Group

Now that you have all your dessert options figured out and spices and ingredients, heavy cream (yum), plus a teaspoon ground cinnamon for that special flavor its time to make your golden brown pumpkin production.

If you are having a large party, or perhaps a BBQ at a picnic – serving one 9 inch round Pumpkin Pie with heavy whipped cream or miracle whip for 6 people should be ok as they will have already had some snacks and some subs or sandwiches.

If you’re feeding a big group, and you know they are large eaters, you can always buy an extra pie.

How much normal cake should you serve per person?

How Many People Does a 12 inch Pumpkin Pie Feed?

Pumpkin Pies are delicious, and they’re perfect for holiday dinners.  But how many people does a 12 inch Pumpkin Pie feed? Well, it will easily feed 8 people.

How Many People Does a Costco Pumpkin Pie Serve?

A Costco 28 oz Pumpkin Pie is pretty big and it will serve about 7-9 people, more if you use toppings plus sprinkle over brown sugar and ice cream.

So for any group, there’s a Pumpkin Pie size there, from personal pie through big four pounders.

The big Costco Pie is also back for 2022, and you can buy  3.5 POUND pumpkin dessert pie for around 6-7 dollars, which is an incredible value. Price will vary a little per state or location, and I advise getting in early as the word is people are already buying ahead of time and freezing the Costco pumpkin pie.

When I worked at Costco one season, we have this in the staff area, and I have to say it tasted pretty good.

How Much Pumpkin Pie Do I Need for a 20 People Thanksgiving Dinner?

If you’re planning on having a 20-person dinner, then you should make or purchase  4 ( you might get away with 3 – but I like to have a little extra) 9 inch pies. That way, you will have available for seconds., you’ll need to have enough Pumpkin Pie for everyone to enjoy. But how much exactly?

How Many People Does a 9 inch Pumpkin Pie Feed 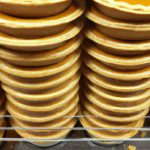 For every six people, you’ll need one 9 inch Pumpkin.

How Much Pumpkin Pie Do I Need for 20 People

You will need just over three 9 inch pumpkins pies – I would buy 4.

Of course, this is just a general guide. If you know your guests will be particularly hungry, you may want to make a few extra Pumpkin Pies just to be safe.

Thanksgiving Dinner used to be called turkey dinner but with the addition of a spiced pumpkin dessert with a custard style filling, plus often a pumpkin spice latte the Cucurbita pie has added a whole new dimension to the family holiday dinner.

How Much Pecan Pie per Person