HOW TO COOK CORN ON THE COB INSTANT POT

You have to make Instant Pot Corn on the Cob if you want a great summer staple. You can peel the cob in a few minutes or leave it in the husk and make it on the cob.

One of my favorites for preparing corn on the cob is by cooking it in the pressure cooker and it will come out delicious every single time.

I think that this appliance is great. I would be spending so much more time in the kitchen than I really want to if I did not have an instant pot.

Usually, you just boil corn. Is it hard or difficult – no – but it takes time – up to 20 minutes by the time you get the water boiling.

Cooking corn on the cob in a pressure cooker will save time because you don’t have to stand at the stove for 20 minutes waiting for the water to boil before putting the lid on and pressure cook.

See Grandma’s Butter Carrots – this is another great vegetarian recipe. This also goes well with pork ribs, made in an Instant Pot.

When I buy fresh corn at the store, this is what I look for in the corn ears

The silk in the top of the corn can get soggy if it gets rained on. I prefer the ears of corn that are small and don’t have any mold or dirt in them.

How to Prepare Pressure Cooker Corn on the Cob

If you heat corn on the cob with the husk on, it will keep it warm when it is removed from the Instant Pot. Plus it helps keep in the flavor – you just need to remove the corn silk carefully.

When pressure cooking the corn on the cob, leave the husk on it to cut off the bottom and it will slide out without you having to shuck it.

Preparing Corn on the Cob Leaving the Husk on

Preparing Shucked Corn on the Cob

The recipe for corn on the cob in the electric pressure cooker, you will need whole or half corn ears and one cup of water.

I would prep at least two ears of corn and up to six, depending on the size of your pressure cooker. A six-quart model will fit five or six corn cobs.

Add about one cup of water to the Instant Pot or pressure cooker – enough to cover the bottom well and produce steam. You may need 1.5 cups for an 8-quart pressure cooker.

Cook on high pressure for 5 minutes

Corn can overcook and have a canned corn taste if it is left on the cob for too long in the Instant Pot. The easiest way to dodge this is to turn off the “keep warm” mode of the Instant Pot before doing a quick release. You can keep the corn warm with residual heat by returning the lid.

Now you are ready to serve perfectly cooked corn from a pressure cooker – so much better than opening a can of creamed corn.

How to Freeze Cooked Corn on the Cob

If you do want to freeze your corn, make sure to remove it from the liquid first otherwise they won’t last very long.

You also must wait for corn to cool down. When cool cut the kernels using a sharp knife once it is cool enough to hold or handle. Then you put it into a plastic bag.

Seal the bag and place it in the freezer, then squeeze out all the air first by leaving a small gap open at the edge. The frozen kernels can be kept for up to eight months.

What are the Best Kitchen Utensils For Corn Cobs

Corn on the cob stripper

Corn On the Cob eating holder

Corn on the Cob Serving Plates

How to Season your Cob Recipe

Other Corn on the cob serving ideas

Use Fresh Herbs: Take a Brush and paint on some yogurt, butter, or even mayonnaise. Then sprinkle with chopped parsley, chopped chives, or chopped cilantro.

Parmesan Cheese: Cover the corn liberally with butter and grate some fresh Parmesan cheese over the corn while it is still hot. 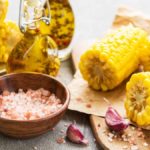 Instant Pot Corn On the Cob

Note- take off all the corn silk before cooking – as when they are cooked they are too hot to handle.

How to Fry Pork Chops