You might have seen purple ice cream, purple macarons, purple brownies, and many other purple foods. These dishes are the star of the photoshoot. And the purple color is given by ube.

Ube means Tuber in Tagalog. Ube is a purple yam that is originally from the Philippines. Ube is different from the purple sweet potato; it has a sweeter and mellow taste. Ube is popularly used in desserts and Filipino cuisine. Ube is often boiled and then it is mashed with condensed milk. It is an exotic vegetable a bit like the Asian fruit durian.

Even though it is difficult for you to find ube in any grocery store near you, it is a fact that the rise in the use of ube in desserts is happening all over America. Ube isn’t just an old root vegetable.

Although it is similar to sweet potatoes, it has its distinctiveness. When you try it, it can become your favorite veggie, an exciting new addition to many dishes and desserts, and also new favorite color.

Ube tastes like a sweet potato, yam, or kumara; only it has a taste of the earth associated with it.

It is not unpleasant, but the flavor for some people can take some getting used to.

Ube has a beautiful vivid violet to bright lavender. The texture of ube is dryer than red yams and sweet potatoes; this gives it a slightly powdery feel.

Although Ube has a sweet and earthy taste like sweet potatoes, it has a distinctive nutty vanilla-like flavor.

Ube has a smell that is natural and earthy in its aroma. It is a unique smell, and it is a very pleasant smell for most people, especially when the vegetable is fresh.

Here is an insight into the different ways in which Ube is consumed:

Fresh Ube is purple yam. It originates in the Philippines and is a versatile ingredient in the Filipino kitchen. You can find fresh ube in grocery stores in the US and across Asia. Although you can consume fresh ube, it is best when cooked.

Ube is seldom imported as a fresh tube in North America. It is also found in Asian grocery stores’ produce sections. If it’s your lucky day and you get fresh ube for yourself. You can peel and boil ube and have it as a snack. You can also mash it and freeze it.

You will find packets of frozen ube in many grocery stores across Asia. Frozen ube is usually mashed or grated, and it is cooked. Freshly boiled ube can be frozen and kept in an air-tight container for up to 3 months. It is important to defrost the frozen ube before using it.

Frozen ube can be found in the frozen section of any Asian grocery store. Frozen ube is generally mashed or grated and cooked so that you can use it right out of the package.

Ube powder is made by processing ube or purple yam. It adds a mildly sweet flavor and a purple color to foods like cakes, candy, ice creams, jams, and desserts. The ube powder is made with dried purple yams (ube) ground into a powder form.

Ube powder is also known as purple yam powder. It is made from cooked, mashed, ground, and dehydrated ube. It has to be cooked with water to make a paste which can then be added to smoothies, white chocolate, ice cream, and pasta dough. It is a good natural alternative to a Bob Ross Drink.

Ube extract is a colored extract used to make visually appealing dishes in Filipino. It has a creamy and coconut-like taste and is not very sweet. Ube extract has a slightly nutty vanilla taste than the cooked ube. It has alcohol content, so it does not go bad for a long time.

A few drops of ube extract add fresh purple color and sweetness to many recipes like Halo-Halo cocktail and ube buns. It is also becoming popular in bubble tea.

Ube ice cream can be made with some simple ingredients and ube. It is a creamy, nutty, vibrant-looking, absolutely delicious ice cream. In Filipino cuisine, the ube ice cream is one of the most popular preparations.

Ube ice cream is one of the most significant ingredients in the famous Filipino dessert and halo-halo. It has a fantastic taste and goes perfectly with any of your favorite warm pies.

Why Do People Confuse Taro and Ube?

Taro is not edible when it is raw. It contains calcium oxalate that causes stomach pain, breathing difficulties, and irritation. However, when cooked properly, you can consume it similarly to potatoes.

People define taro as a potato with a lot of fiber. Taro can be mashed and boiled, and you can make chips, fries, and curry with it.

Ube is one of the most popular ice cream flavors in the US and other parts of Asia. People make “Halaya Ube,” or purple yam jam with vegetables in the Philippines. In general, ube is sweeter than taro, and making a savory dish with it isn’t easy.

Both taro and ube are from the sweet potato family. They both are root vegetables and have starchy textures. Another main reason for the confusion is that many people don’t have access to these vegetables in the market, so they must purchase taro and ube in powder form.

Both are starchy roots that are native to Southeast Asia. Ube is known for having a sweet, slightly natural forest taste, whereas taro is not so sweet and milder tasting.

However, both are delicious and nutritious. Ube is sometimes called purple yam, although it doesn’t really resemble any kind of yam. Instead, it looks more like a large potato.

Ube is available year-round, but it’s harvested during the rainy season, which lasts from April to October. During these months, farmers harvest the tubers and dry them in the sun until they turn brown. Then they’re ready to ship.

Ube is sold fresh or frozen, depending on where you live. Some grocery stores sell it dried, too.

Ube is commonly eaten raw, but it can also be cooked and served as a side dish. It’s especially popular in Japan, where it’s known as aburaage. To prepare it, cut the peeled ube into small cubes and stir-fry them in oil. Add salt and sugar to taste.

Does Ube Have a Flavor 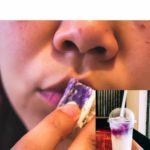 Ube is a sweet potato variety native to the Philippines. It’s known for its rich purple color and mild sweetness, so yes, for most people, the taste is good.

Ube is a sweet potato variety native to the Philippines. It’s known for its rich purple color and mild sweetness, so yes, for most people, the taste is good.

While it’s sometimes called “sweet potato pie,” it doesn’t taste like pumpkin pie, although it is becoming a popular trend to have a “purple pumpkin pie – made out of ube.

It’s a popular snack food in the Philippines, and it’s been gaining popularity in the United States recently.

It’s also delicious and served cold, either plain or mixed with other ingredients such as coconut milk, honey, and vanilla extract.

Ube is a versatile ingredient that works well in many different recipes. It’s especially good in desserts, smoothies, and baked goods. It’s also perfect for savory dishes, such as curries and stews.

Difference Between Brisket Flat and Point

How Much Pumpkin Pie Per Person