I’ve been cooking bacon in an air fryer for a few years now, and I love the simplicity, speed, and taste. Set at the right temperature, bacon in the air fryer gives an umami flavor that is light and has reduced fat due to the ninja air fryer or power xl method of frying.

I love the crispy texture and flavor. But I never thought about making anything else in there until recently I discovered that you can make waffles, grilled cheese sandwiches, pizza crust…the list goes on and top it with bacon! – The perfect meal for one or a small crowd and lastly, not to forget the all American Classic – Bacon and Eggs.

In this post and video, I’ll show you some tips and tricks for cooking bacon in your air fryer. You’ll learn how to cook bacon perfectly every single time.

Furthermore, you can use an air fryer to reheat leftover bacon.

Can You Cook Bacon in An Air Fryer

Cooking bacon in an air fry oven is easy, convenient, saves money, and allows you to avoid bacon fat splatters and the bacon grease drips off. But there are many different types of air fryers out on the market, so it’s important to know what features to look for before making a purchase.

The key features that I look for are

Can You Put Bacon in An Air Fryer

And what about cooking bacon in an air fry pot? – yes, this requires an adaptor for the instant pot – but you simply put the bacon on the trivet supplied, similar to the air fryer tray.

However, if you are cooking bacon for a crowd you may wonder what is a single serving of bacon per person.

How Long to Cook Bacon in the Air Fryer

Cooking Time: Thick-cut bacon takes longer to cook than regular cut bacon because it needs more time and typically has a larger surface area which needs to absorb heat for the thicker meat portion. Thicker cut bacon like Canadian bacon, as opposed to Irish bacon, tends to have less excess grease.

If you want to use thicker bacon in your next batch, don’t worry about preheating the air fryer before cooking the bacon. This step isn’t necessary.

Cooking Times For Types Of Bacon in Air Fryer

Cooking times vary depending on how many slices are being cooked. A single slice of thick-cut bacon will take slightly shorter than 3 thick, simply the increased airflow when the strips of bacon are not close together.

Crispy Air-Fried Bacon is probably one of the best bacon Air Fryer Recipes.

If you have more that 2-3 people you are going to have to cook your bacon in batches, especially if you want to get the crispiest bacon.

Cooking for a crowd, use baked bacon in the oven method or the combo sheet pan bacon and eggs.

You can also double up your cooking ways by employing microwave bacon at the same time.

How Long to Air Fry Bacon

Cooking bacon doesn’t have to take long, so you can do batches of bacon, especially for a big group, and any leftover can be made into bacon butter for holiday dinners to add extra flavor

In fact, it can be done in less than 10 minutes. And you don’t even have to use a frying pan. This method works great for thin slices like regular bacon or thick-cut bacon.

The secret behind air fryer bacon is the way it cooks. Instead of being submerged in hot oil, the food is placed directly over the heating element inside an airtight cavity. The heat (hot air) circulates and conducts heat evenly across the entire surface, resulting in perfectly cooked bacon every time.

To cook bacon in an air fryer, place one slice of bacon per serving into the basket. Cook according to the package recipe below. If desired, sprinkle with salt and pepper prior to eating.

Bacon Air Fryer Time – use the table above.

How to Cook Bacon in the Air Fryer

Cooking bacon in the air fryers is easy, but you must follow a few steps carefully. First, make sure that your air fryers have been cleaned thoroughly.

Once you’ve determined the proper temperature, place your meat into the air fryer basket and cook.

Do not overlap or lay the bacon on top of other slices if you want crisp bacon. 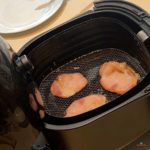 In this video we debunk popular myths about air frying bacon.

Myth #1 – You Can Only Air Fry Thin Slices of Bacon

This myth stems from the fact that most air fryers don’t actually cook food evenly across the entire surface area. If you look closely at the bottom of the pan, you’ll see that the heat isn’t evenly distributed throughout the whole thing. This makes thin pieces like strips and rashers less likely to cook properly.

For Thick Bacon in Air Fryer – Bacon air fryer time, however is important for thicker slices as you need to make sure it is cooked right through, but the cooking method is similar.

You might think that preheating the air fryer is necessary to ensure the best possible outcome, but that’s not true. While it does help to warm up the interior of the unit, the temperature inside the actual air fryer doesn’t matter much.  Just follow the recipe, make sure you have good air circulation, and this also helps the fryer from smoking.

Myth #3 – You Shouldn’t Overcook Bacon in Your Air Fryer

While you want to avoid burning your bacon, you don’t necessarily want to undercook it either. The reason why is simple: the longer you let the meat sit in the circulating air, the drier it gets. And dry bacon is tough. To avoid this problem, simply flip your cooked bacon over halfway through the cooking process and take it out when it beeps for perfect finished bacon.

How To Reheat Bacon

How to Reheat Bacon in Air Fryer